Aptis Speaking Test 7 with B1 Answers 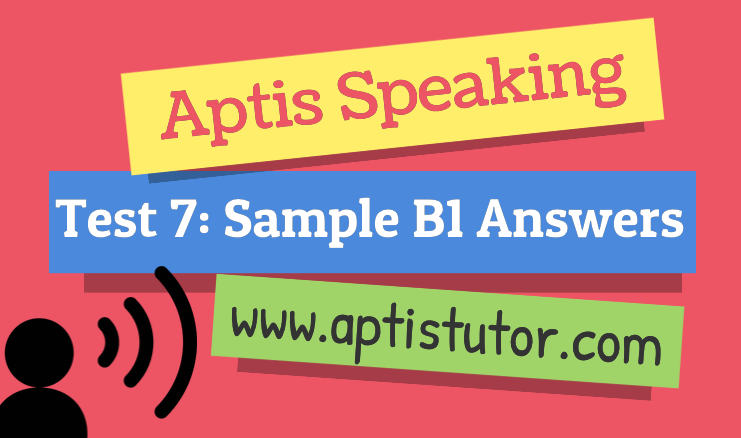 Here’s the supplementary version of Speaking Practice Test 7, this time with sample B1 answers. If you haven’t tried the mock-exam Practice Test 7 yet, we recommend you do so before watching this video.  Test yourself and make some notes on the answers you give. Also note down any questions you found difficult to answer. It may be that you ‘go blank’ and can’t think of what to talk about. Or it could be you don’t have a variety of structures and vocabulary to use. As we’ve mentioned before, many themes recur in the Aptis tests. So if you can identify the themes you have problems with, you can work especially hard on those areas.

Look back at the answers you gave in the exam-style test. Have you used a variety of tenses in your responses?  For example, not just past simple, but also ‘used to + infinitive’ and present perfect? Have you tried to use different future forms (not just ‘going to + infinitive’)?  What about your vocabulary? Have you used any ‘colourful’ or extreme adjectives, like ‘delighted’ instead of ‘happy’, or wonderful’ instead of ‘nice’? And have you spoken for the full amount of time?

When you watch the video with sample B1 answers and read the script, think about how you could improve your responses. Use the grammar as a framework – take out our examples and put in your own.  For example, we’ve said: “I’m going to spend next weekend with my friends. If the weather’s good, we’ll probably go to the beach.  If not, maybe we’ll go to the cinema.” Substitute the underlined parts with your own ideas. Memorise short framework phrases like that for use in the exam. Don’t memorise long parts of the script – it will sound unnatural if you do that.

Please tell me about your favourite animal.

My favourite animal isn’t very typical – I love bats! I used to love Batman when I was a child, so maybe that’s why I like them. Most people think they’re ugly, but I think they’re really cute! They’ve got sweet faces and they’re so small. I love watching them fly. They’re also useful animals, because they eat mosquitos.

What are you going to do next weekend?

I’m going to spend next weekend with my friends. If the weather’s good, we’ll probably go to the beach. My aunt has a small flat at the coast, and she’s not going there next weekend. If not, maybe we’ll go to the cinema. I’d really like to see the latest Marvel film. I’ve already seen most of the others – they’re great!

Please tell me about your best friend.

One of my best friends is Angie. We met in a market – she was selling jewellery and I bought a pair of earrings. We started talking, and now we’ve been friends for over 20 years. Angie’s a very kind and helpful person. She always listens if I have a problem, and I do the same for her.

There are five children, three girls and two boys. They’re sitting in a line and looking at mobile phones or tablets. It looks funny, because they’re wearing old-fashioned costumes but the mobiles are modern! One boy is dressed like an admiral, and the other one looks like he’s from a royal court. Two of the girls are wearing long dresses, and the other one might be in school uniform. They could be in a theatre – perhaps they’re going to do a school play. Or maybe they’re at a party.

What type of games do children in your country play?

I think the most popular type today are video games like Fortnite or FIFA. All the kids have Playstation or something similar at home, and they play online with their friends or with kids from other countries. At school they play more active games in break-time, like football or basketball or skipping. Most children also play imagination games, like ‘teachers and students’ or ‘doctors and nurses’. And sometimes a new game or toy appears, like ‘fidget spinners’ and they all play that.

How have children’s games changed in the last fifty years?

I think they’ve changed a lot. When I was a child, we were always playing sporty games in the park. At home we used to play cards and board games with all the family, but these days many children only want to play electronic games alone in their rooms. Nowadays even young children have their own tablet or mobile to play with. So I think that’s the biggest change. But some traditional games are still popular, like hide-and-seek, hopscotch and ‘rock, scissors, paper, stone’.

Both pictures show different types of jobs. In the first picture you can see two firefighters walking outdoors, while in the second there’s a doctor and a patient indoors. The firefighters are both women, and they’re carrying long hosepipes. The street in the background looks very wet, so perhaps they’ve just put out a fire. They’re both wearing protective clothes, whereas in the doctor is dressed in everyday clothes. He’s giving a woman a vaccination in her arm.

What kind of people choose these jobs?

Firefighting is a really dangerous job, and I think firefighters have to be brave. They risk their lives at work every day. They also need to be extremely fit and strong. In my opinion, these people like danger, and they would be bored in a normal job. So they become firefighters. People who choose to become doctors usually want to help people. They have to be friendly and patient, and know how to listen. They must also be intelligent, because you have to study a lot to be a doctor.

Which would you prefer to do, and why?

In normal times I’d definitely prefer to be a doctor, because I’m really scared of fires. But now we’ve got the pandemic, I think it’s also dangerous to be a doctor or a nurse! So that’s a difficult question to answer. I think I’d be better as a doctor, because I enjoy working with people. It would be more interesting, because I’d meet people of all ages and every day would be different. On the other hand, I really wouldn’t want to work in a hospital these days. I’d rather be a family doctor.

Tell me about a time when you learned something from an older person.

Why do you think such relationships between generations are important?

I’ll never forget my grandmother’s stories about her life in the second world war. She was a single mother with three daughters, and life was hard. They were poor and she had to work, but she didn’t want to leave her children alone. So she decided to send them out of the city to stay with relatives in the countryside. She missed them every day, but she knew it would be safer for them. I learned that when you’re a parent, you sometimes have to make hard decisions to do what’s best for your children.

Her story made me sad, but I also felt proud that she was so strong. I hope that I can be as strong as her if I have children.

In my opinion relationships between generations are really important because both sides can learn from each other. Children learn about real-life history and understand what life used to be like. And for old people it’s a great way to keep in touch with modern life and stay young. Children have a lot of fun with their grandparents and other older relatives, and old people are usually delighted to see them. They don’t feel so lonely. So that’s why I think these relationships are very special, for everyone.

After watching Test 7 with Sample B1 Answers

You’ll find all our Aptis Speaking Practice Tests in the Guide to the Posts, together with all the extra vocabulary and grammar exercises.

And to help you prepare for the Aptis Core Test, do the Vocabulary and Grammar practice tests too.