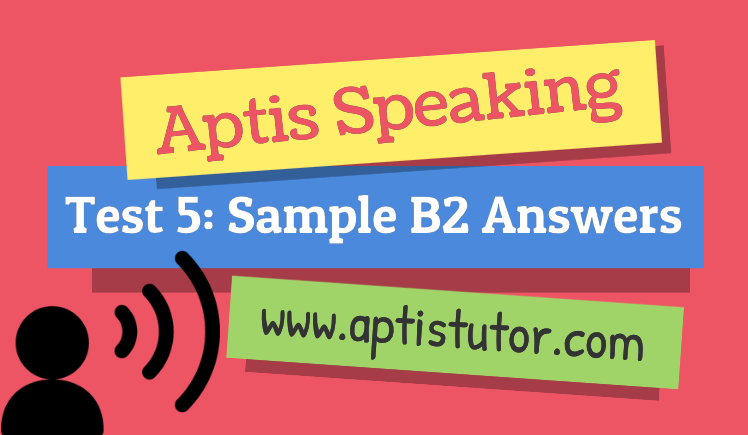 Aptis Speaking Practice Test 5 with Sample Answers at B2

In this video we’ve given you sample answers at B2.  As always, we suggest you try first with the exam-style Speaking Practice Test 5.  That way you’ll be able to see if there are any areas in which your answers are a little weak.  Then watch this video and take notes of useful language that could help you improve.

We’ve said it before, but we’ll say it again: don’t just try to memorise the sample answers. Why not? Because if you recite sentences that you’ve learned by heart in the exam, it will be obvious to the examiner. Your answers won’t match the questions, and this will affect your mark. You need to study they type of language and expressions we use, and try to incorporate some of them when you answer the questions yourself.

Sample Answers at B2: Script

There are sample answers at B2 for each part of the exam.  They’re written and read by a native speaker.  Of course, we don’t expect you to give such a full response – these are model answers.  The idea is to give you as many ideas as possible.

Useful B2 grammar structures, lexis and expressions are in bold. You should use these sample answers as a framework to complete with your own responses.

Remember you can find out more about B2 language here: Use of Language.

My first school was called St Mary’s. My older brother was already going there, and I couldn’t wait to start! I kept asking my parents “When can I go to school?” I was four when I finally started, and I remember that everything seemed so big! We used to have storytelling and reading in the morning, then have a break. After that we would do painting – I loved it!

Last weekend I finally visited my grandparents. I hadn’t been able to go since the pandemic started, as they live in a different province. We had a great time together – my grandfather had prepared a wonderful meal, and my grandmother kept telling me how happy she was. It was a very emotional day. I’m really looking forward to going again soon.

I love reading, so this is a hard choice to make. If I had to choose just one writer, I think I’d say Isabel Allende. Her novels are always interesting – she’s a good storyteller. She also writes about real experiences, such as when her daughter died of leukaemia. And she had an interesting life – she grew up during the dictatorship in Chile. Nowadays she lives in the USA.

This photo shows three people travelling by metro ­– maybe it was taken in Madrid, or another big city with an underground system. It’s not crowded, so it can’t be rush-hour. The woman looks serious – she’s concentrating on her mobile phone. She’s wearing casual clothes, so she might be going shopping. One of the men is reading – it looks like he’s on his way to work, as he’s wearing a suit and carrying a briefcase. The other man could be a tourist or a student, as he’s dressed more informally and he’s got a backpack. He’s also checking his mobile.

Well, it depends on whether you live in a city or a village, but I’d say most people probably travel by bus. There’s quite a good railway network in Spain too, but the trains don’t always reach small villages. So if you haven’t got a car, you have to go by bus. For long distances, buses are a little more expensive than trains, but most people prefer them. Another form of public transport that’s popular around town is the tram. People like them because they don’t cause pollution, and the service is reliable – they’re not affected by traffic jams like buses.

In lots of ways … in cities, bikes have become a lot more popular. Most towns and cities have bike-hire too, and it’s a good alternative if you’re fit enough and there are enough bike-lanes to travel safely round town. The government has been trying to provide cleaner forms of public transport, especially in the last 20 years. Electric buses have been introduced in many towns and cities. And an old-fashioned form of transport that has come back in many places is the tram. It’s very frequent and far more environmentally-friendly.

The first photo shows an orchestra, and the musicians look like teenagers, whereas in the second picture there’s a punk rock band, and they look at least forty. The young violinists are all wearing formal white shirts and black trousers – it might be their school uniform – while the punks are dressed in typical jeans covered in chains, and T-shirts. Both photos were probably taken during a concert, or perhaps a rehearsal. The punks have spiky hairstyles, while the teenagers look more ordinary – except for one with pink hair, who could be a secret punk fan!

Well, I think most people who go to punk concerts are young people who want to listen to loud music, or older people who used to be punks when they were teenagers. I can’t imagine other older people at a punk concert! As for classical music concerts, the typical audience would probably be middle-aged or old people. On the other hand, classical music is also popular with some young people, especially if they play a musical instrument themselves. It also depends on what type of music you’re used to hearing at home, I think.

It depends … I wouldn’t like to go to a punk concert, but I do like rock and pop, so I’d rather go to a rock concert than a classical one. I love the atmosphere of a live concert, and the fact that you can dance. I’m not really into concerts where you have to sit in your seat and keep quiet. I prefer to join in with all the well-known songs, and it’s something I like doing with a group of friends. But I have been to a few classical concerts, and I’ve really enjoyed them. So maybe my tastes would change if I went more often.

NOTE: It’s important to make sure you answer all three questions, but it’s often more natural to combine the first two, as you can see here.

I’ll never forget the first time I had to use technology to give a presentation to my colleagues.  I’d always used a slide projector before, but this time I had to connect my laptop to a different computer system.  First of all, the cables were wrong, as I had a Mac and they had PCs.   So that was frustrating.  Then I couldn’t make the sound work.  I was feeling more and more nervous.  I finally managed to get everything ready, and I introduced myself.  But then I suppose I clicked on the wrong key, because instead of my presentation, I ended up showing my holiday photos! I felt really embarrassed!  I went bright red and wished I was a thousand miles away!

In my opinion, technology has improved our lives in many ways, especially since the pandemic.  We’ve been able to keep in touch with family and friends and share special moments.  Having video calls has meant we can see each other’s faces – not just hear voices, like on the phone.  What’s more, many people have managed to keep on working by using technology such as video-conferences on Zoom.  And it’s not just about computers – technology has also made a big difference in our daily lives.  Gadgets like the Thermomix save us a lot of time in the kitchen.  To my mind, having more free time is one of the biggest improvements.  And technological developments like electric cars and buses have improved our environment too.

Finally, watch the original video again and try to use some of the ideas from the B2 script. As always, try to give full answers to the questions. Remember to include as many different structures as possible, and try to vary your vocabulary. We’re sure you’ll notice the difference!

If you’ve already done Practice Test 5, make sure you look at the other videos in the series.  You’ll find a complete list in the Guide to the Posts.

All the extra vocabulary and grammar exercises are there too.  For example, you can practise your adjective endings or check your use of Reported Speech.

And remember to do the Vocabulary and Grammar practice tests too.  These will help you prepare for the Aptis Core Test.