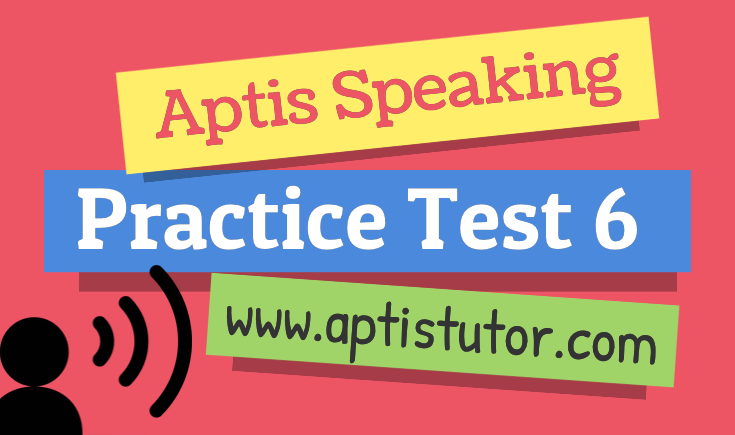 This is the sixth exam-style speaking practice test.  These mock-exam videos are for you to try on your own.

Before we start, let’s remind ourselves of the tasks in each of the four parts:

Remember that Aptis General is for students from A1-level upwards. For this reason the test is graded; it gets more difficult as it progresses. So Part 1 is the simplest part of the test. The questions are straightforward so that lower-level students can answer them in a basic way. However, that doesn’t mean you have to give simple answers!

First read the questions we’re going to ask you in each part and make some notes on what you want to say.

In this post we’re going to give you some examples of how you can start to do this (they’re not complete responses). The first answer in each part is very basic, while the second (in bold) is a higher-level response.

We’ll give you more ideas on this in the supplementary version of Test 6, which we’ll upload soon.

I like swimming. I go to the beach every day.

Well, I’m really keen on swimming, so I love spending time at the beach.

I went to Madrid and visited the big museums and parks.

I spent the weekend sightseeing in Madrid – I hadn’t been there since lockdown.

My best holiday was when I visited my friends in London. I had a good time.

The most fantastic holiday I’ve ever had was when I was invited to stay with friends who live in London.

I can see a big city and a river. There are factories near the river.

The photo shows an industrial area on the riverbank of a major city.  There are some factories in the foreground.

I think the biggest problem is traffic in the city centre. Cars and buses cause a lot of pollution.

As I see it, exhaust fumes from vehicles are the major problem. The air quality is getting worse, especially in the city centre.

There are more electric buses, and in many towns you can’t drive in the city centre now.

They’ve provided alternative forms of public transport such as electric buses.  Driving in the city centre has been banned in many towns.

In the first picture I can see four people having a picnic in a park. In the second photo there’s a man and a woman eating in a restaurant.

Both photos are of people having a meal. The first shows a family – or it could be a group of friends – having a picnic outdoors, while the second shows a couple having a romantic meal in a restaurant.

Picnics are popular with families, because they’re less formal. Older people usually choose to eat in a restaurant, because it’s more comfortable.

Most people could probably enjoy both situations, although older people might not feel as comfortable sitting on the ground. Eating out in a restaurant is great for couples, as it’s more intimate.

Which eating experience would you prefer and why?

I’d usually prefer to go to a restaurant, because I don’t like cooking!  And also because you don’t have to prepare all the food and carry it to the park.

Well, it depends. If I were celebrating a special occasion, I’d prefer to go to a posh restaurant. It’s more relaxing, and it can be a hassle preparing all the picnic food and carrying it to the park.

Tell me about a time when you received a present.

I remember my tenth birthday. I really wanted a pet when I was a child, and one year my parents gave me a big box.

I’ll never forget my tenth birthday. I’d wanted a pet since I was really little, and at last my parents came home with a big box.

I felt very excited because I could see pictures of animals on the box, so I knew it was from the pet-shop.

At first I was really excited because the box was covered with pictures of animals, so I could tell it was from the pet-shop.

I think that giving presents is important for most people. It’s nice to receive a present on your birthday, because it shows that your friends and family are thinking about you.

To my mind, giving presents really means a lot to most people. Nobody likes being forgotten on their birthdays or on other special occasions. Getting a present makes you feel loved – even if it’s not exactly what you wanted!

As usual, if you have any problems thinking what to say, pause the video.  Make some notes of what kind of vocabulary you think you’ll need.  Again, try to raise the level of your answers by using less common words.  For example, instead of saying ‘big’ or ‘large’, try ‘huge’ or ‘enormous’.  Instead of saying something is good, say it’s amazing or wonderful.

If it’s a structure you need in order to answer more fully, go to the Grammar Reference section.

As we’ve said before, when you watch the practice videos you’ll begin to recognise typical themes.  Make a note of them, together with the vocabulary and grammar areas you need to answer fully.

Now go on to the supplementary version of this video, which contains lots more ways to improve your answers.

Meanwhile, make sure you do the other Aptis Speaking Practice Tests.  The complete list is in our Guide to the posts, together with all the extra vocabulary and grammar exercises.  For example, practise your use of Adjective Endings, or check your use of the 3rd Conditional.

And don’t forget to practise for the Aptis Core Test by doing the Vocabulary and Grammar practice tests too.