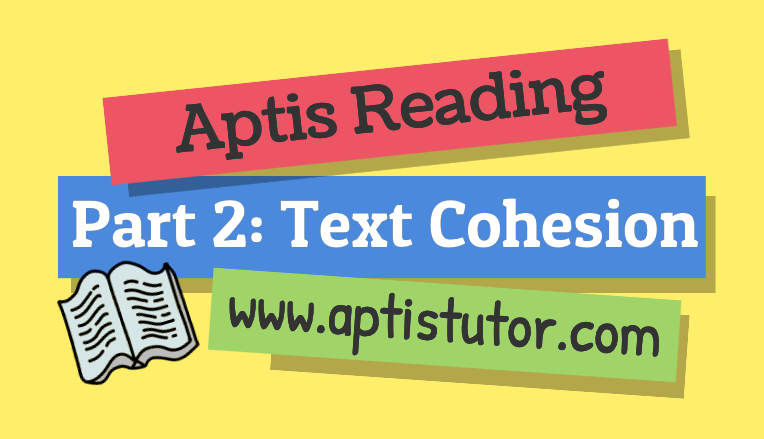 In Part Two of the Aptis Reading Test you have to do two tasks of the same type: text cohesion.  We’ve got four exam-style practice tests for you to do.  But first, let’s take a closer look at cohesion in both reading and writing.

So what does that mean? Well, cohesion means ‘sticking together’, so a cohesive text is basically one that makes sense. It follows a logical sequence.

What do you have to do? You have to put six sentences in the correct order to form a very short text, and there’s only one correct way.

And how do you do that? Firstly, the texts are often about everyday activities.  So using your common sense can help – you need to look for a logical structure. For example, you go to bed, then you go to sleep, later you wake up, etc. Secondly, by looking for clues in the text that will help you re-order the sentences.

Words that can act as clues

Sequencing words: firstly, then, when, while, afterwards, finally, etc.

Words that introduce reasons: because, since, so, as, etc.

Pronouns: When we first talk about a person, we usually use their name – for example, John. Then later we can use the pronouns he or him to refer to John again. The same is true with things; we use the pronouns it or them.

Articles:  Similarly, the first time we mention something, we usually use the indefinite article – for example, a TV. Then later we use the definite article.

Look at these sentences:

He bought a TV in the sales. (He refers to John, and this is the first time we hear about a TV.)

The TV was half-price. (Now we know about the TV.)

Later he put it in the boot of his car. (It refers to the TV.)

Some advice on how to approach the text cohesion tasks

First, quickly read the all the sentences to try to get the general meaning.

Think about what makes a logical sequence of events.

Look for sequencing words – these will help you a lot.

Put the sentences into order.

Finally, re-read them to check that the text makes sense.

NOTE: If you’re not sure, then guess. Never leave this task unfinished.

In the Aptis Text Cohesion tasks, the first sentence is always done for you as an example. Then you have to click and drag the other five into the correct order.

Here are four exam-style practice tests for you to try.  If you’re working on a desktop computer, our practice tests work exactly like in the official exam – you click and drag the sentences.  If you’re doing it on a mobile, you’ll have to use the up/down arrows.

In both cases press ‘Check’ when you’ve finished.  You’ll also find the solutions at the bottom of the page.

The best way to improve your skills in this area is to read as much as you can. Look at our Top Tips to help you pass the Reading Test, where we talk about Graded Readers and other materials.

Make sure you read the Overview of the Reading Test to familiarise yourself with all four parts.

Practise the rest of the test here: