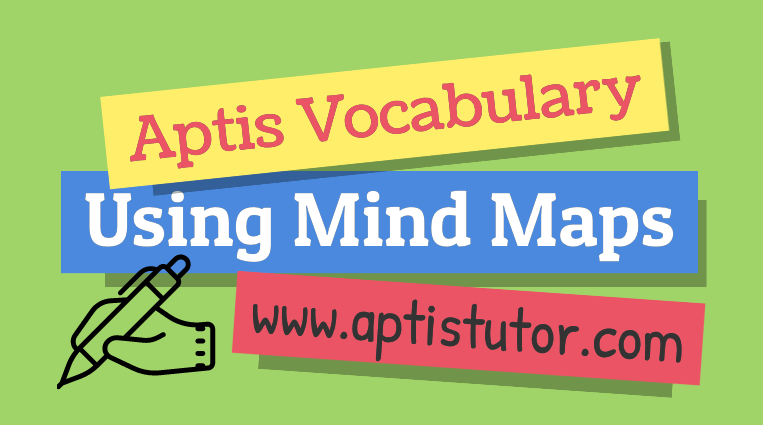 In Vocabulary and Topics we looked at what you need to learn for your Aptis exam. But how do you remember all these words? Learning long lists is pretty boring and unmemorable, not to mention difficult. One way of memorising vocabulary is by making and using ‘mind maps’ which visually represent information. We touched on this in How to Learn New Vocabulary, and in this post we’re going to explain how to do it. There’s also a video to show you the process step by step.

As you’ve probably already realised, a good knowledge of vocabulary is one of most important aspects of learning a language. This can be a challenge in any language, and English probably has more words than most comparable world languages. Many words have more than one meaning, and more are being ‘coined’ (invented) all the time. So it’s impossible to say exactly how many words there are. To give you an idea, the Oxford English Dictionary contains about a quarter of a million words. But don’t worry – you don’t have to learn that many to pass your Aptis exam!

Before we start, let’s have a quick look at how it all started. The term ‘mind map’ was first popularised by the British author Tony Buzan. However, the use of diagrams that visually map information goes back hundreds of years. Some of the earliest examples were developed in the 3rd century AD, when the Phoenician philosopher Porphyry of Tyros graphically visualized the categories of Aristotle.

The benefits of using mind maps

I’ve used mind maps for many years in my own language-learning. The great thing about them is that you can see connections between distinct words very easily. Many people learn better when they can see information, so mind maps work especially well for visual learners like me. (The main styles of learning are visual, auditory, and kinesthetic or tactile. For the teachers reading this, here’s an interesting article.)

There’s a lot of software available to help you make your own mind maps on the computer. If you feel this would work better for you, why not try it? Speaking personally, though, there’s something that I really like about a pen-and-paper version. What’s more, plenty of research has been done which suggests that the act of writing (physically moving your pen or pencil across the page) helps memorisation. If you’re interested in reading more about this, there’s a really thought-provoking article in Psychological Science. It’s called The Pen is Mightier than the Keyboard: Advantages of Longhand over Laptop Note-Taking, and it’s by Mueller, P. A., & Oppenheimer, D. M.

So let’s get started! I’m going to build one up for you in real-time in the video. I’ve chosen ‘accommodation’ as my main theme, because it often comes up in the Aptis tests. (And it’s not only popular in Aptis, but in Cambridge, Trinity College London and Language Cert exams too.)

Use only one piece of paper that can fit in your file or notebook when you’ve finished. You start off with a central theme, in this case ‘accommodation’. The first thing to do is to think how to break it up into sub-categories. This was pretty easy in this case. I began with permanent accommodation (‘house’, ‘flat’ and ‘other’) and added some adjectives and collocations. Then in another circle I wrote temporary (‘hotel’, ‘hostal’, ‘bed and breakfast’ etc).

I prefer to use some pictures to help me remember words, so that I’m not translating all the time. But if this doesn’t work for you, it’s fine to translate the words too. I also recommend using colours, stress bubbles, and phonetics to help you remember the pronunciation. If you don’t know the phonetic alphabet, just write it as it sounds in your own language.

Now I look at my map, it looks a bit like a child made it! But I enjoyed the process of being creative, and that also makes it more memorable. So have fun with it!

Make sure you’ve read the posts we mentioned above about learning vocabulary.

You’ll find the complete list of all our vocabulary exercises in the Guide to the Posts.

And you’ll find all the Aptis General and Aptis for Teachers Vocabulary Practice Tests in Aptis Core Test: Vocabulary and Grammar. We recommend you also read the relevant posts where we explain the tests in more detail.