50+ Useful Phrases to help you pass your Aptis Test 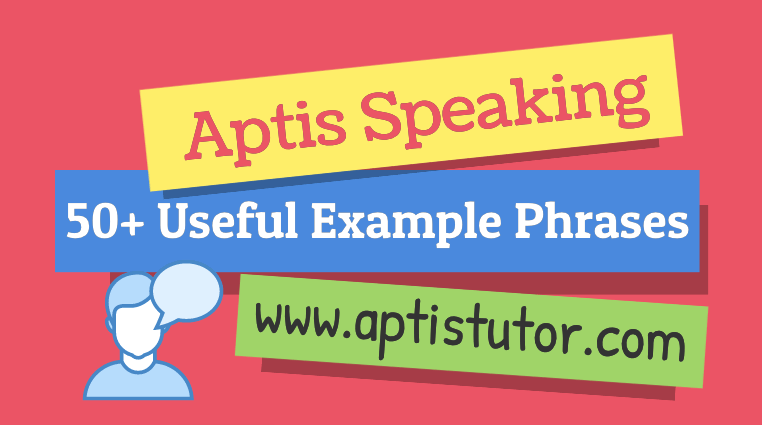 50+ Useful Starter Phrases to help you pass your Aptis Test

It can be easy to go blank in an oral exam – to forget everything you wanted to say!  So here are over 50 useful starter phrases, also called sentence stems, to help get you speaking more fluently in the oral test.

Speaking Practice Test 3 with Starter Phrases gives you useful starter phrases for the specific questions in that mock exam, but here we’ve organised them by function: what they do.  For example, if the question is about your hobbies, free time, favourite place or person etc, you’ll need to look in the category ‘Talking about likes and dislikes’.

The idea is that you complete the starter phrases with your own ideas, but to help you get started, we’ve completed them with our own examples. We’ve also explained which grammar structures to use with them.

You can use these starter phrases to start answering many different test questions.  They’ll also help you prepare for many other types of spoken English exams, not just the Aptis Test.

Try to use a variety of synonyms to express your likes and dislikes, rather than just repeating ‘I like …/ I dislike …’. Remember that in British English all these expressions are followed by verb + ing, plural nouns or uncountable nouns. (In American English it’s common to use to + infinitive after ‘like/dislike’.)

If you want to make this stronger, use:

But remember to use to + infinitive after would like / would love:

I’d love to live in a hot country.

Students often overuse ‘very much’, and frequently make the mistake of putting it straight after ‘like’. Try using ‘really’ instead:

In the Aptis Test they often ask you about your favourite things, or what you think is good or bad about something. Try using these starter phrases:

One of my favourite / least favourite songs (+ plural noun) is Another Brick in the Wall.

My favourite / least favourite ­­­film of all time is Bladerunner.

The best / worst thing about my job is having to get up early.

Talking about the present, customs & habits

Remember that adverbs of frequency go before the main verb, except for the verb ‘to be’:

I sometimes / often / hardly ever go the the countryside at weekends.

You can revise these in our revision section: Get Ready for B1: Adverbs of Frequency

Combine these expressions with a first conditional:

If I have some free time, I usually watch my favourite series.

I always go to the beach if the weather’s good.

Use expressions of frequency too:

We go abroad every / each year.

We go to the mountains once / twice / three times a year.

Talking about hobbies and ability

Questions about hobbies often come up in Part One of the test. Remember to use verb + ing:

My hobbies are listening to music / swimming / making model buildings.

Talking about the past & your experience

Remember that ‘ago’ goes at the end of the phrase when you’re talking about finished actions or states:

I worked in Germany six years ago.

Try to use a variety of past forms, not only the past simple. Use ‘used to + infinitive’ to talk about repeated actions or states in the past:

… have a pet guinea-pig.

You can also use ‘would + infinitive‘ to talk about repeated actions, but not states:

My dad would read me bedtime stories (but NOT ‘I would have a pet when I was a child’).

In the test they often ask you about early memories or special experiences. Here are some good ways to start talking about them:

I remember one particular time when I had a problem at work.

The most memorable occasion was my fifth birthday party.

I can’t remember the last time I read a book.

It was when I was living in the capital city …

I’ve never been (past participle) abroad.

Remember that if you use the present perfect to describe how long something has lasted, use for + period of time or since + a point in time:

Revise this in Grammar: Uses of the Present Perfect.

Use modal auxiliaries and similar verbs:

… should wear (infinitive) face-masks in the street.

… ought to show (infinitive) more respect for each other.

Try to use a variety of synonyms to express your opinions, rather than just repeating ‘I think …’.

… the government could do (infinitive) more.

Here are some more ways to express your opinion:

To tell you the truth, I haven’t decided yet.

I have mixed feelings about whether to go to the UK this summer.

In my experience, it’s always better to tell the truth.

And here are some expressions for giving reasons:

There are many reasons, including salary, job satisfaction, and opportunities for promotion.

The main reason is job satisfaction.

That’s why I decided to change career.

To express your general preferences, use prefer + verb + ing, plural nouns or uncountable nouns. Use the preposition ‘to’:

To express a particular preference for the future, use would prefer + to + infinitive:

I usually prefer the theatre to the cinema, but tonight I’d prefer to see a film.

Use ‘than’ to express the same idea the other way round:

I’d prefer to see a film tonight than to go to the theatre.

You can also use would rather + infinitive:

I’d rather see a film tonight than go to the theatre.

You often have to choose between two options. A useful expression is ‘it depends’. This is followed by on:

This is a good time to use the second conditional:

If I had to (past simple) choose, I’d say (would + infinitive) big cities are best.

If possible, I’d live in a village.

It’s hard to decide, but I think I’d choose a town.

Talking about advantages and disadvantages

There are advantages and disadvantages to living in a big city. (Here ‘to’ is a preposition, so it needs verb + ing.)

Use the synonym pros and cons for variety:

I can think of several pros and cons to living in Madrid.

The main advantage is probably the nightlife.

Another point in favour is the variety of entertainment.

The biggest disadvantage for most people is the cost of accommodation.

Other disadvantages are noise and pollution.

On (the) one hand, there are more schools. On the other hand, it’s not very safe for young children.

Talking about the future & making predictions

The future form we use depends on how sure we are about our plans:

I’m flying to London (I’ve already got my ticket).

(present continuous: to be + verb+ing)

I’m going to stay in Seville (that’s my intention).

We’re going to relax at home (that’s our intention).

I haven’t decided what to do …

You can also use a first conditional:

If it rains, I’ll probably stay at home.

You can use will + infinitive for general predictions:

There’ll probably be a lot of traffic on the roads.

I don’t think we’ll have any problems.

People will probably live on another planet in the future.

Start with a general description:

The photo shows a family.

In the photo you can see a big city.

In the foreground (at the front) you can see a group of people.

In the background (at the back) there are some tall buildings.

She’s dressed as a clown.

The children are looking at her.

You also need to speculate on the place or the occasion and give reasons. You can do this with modal verbs:

… Christmas, because there are decorations in the street.

… a capital city, as there’s a lot of traffic.

You can also use maybe / perhaps, probably and definitely for variety:

It’s probably a capital city, as …

These expressions with ‘look’ are very useful:

It looks like a European market (noun or noun phrase), because the prices are in Euros.

She looks as if she’s going to buy a dress (clause).

It looks as though it’s going to rain (clause).

When you have to compare two photos, use whereas or while:

The first photo shows a village, whereas / while in the second you can see a large city.

We hope this was useful!  Make a note of the phrases that sound most natural to you in each category, and try to learn them.  This will help you feel more confident on exam-day.  Getting started is half the battle!

Go to the B1, B2 & C1 Grammar Reference for help with gramatical structures.

And to improve your speaking skills even more, practise your pronunciation of ‘ed’ endings and ‘s’ endings.