Aptis Speaking Test 9 with B2 Answers 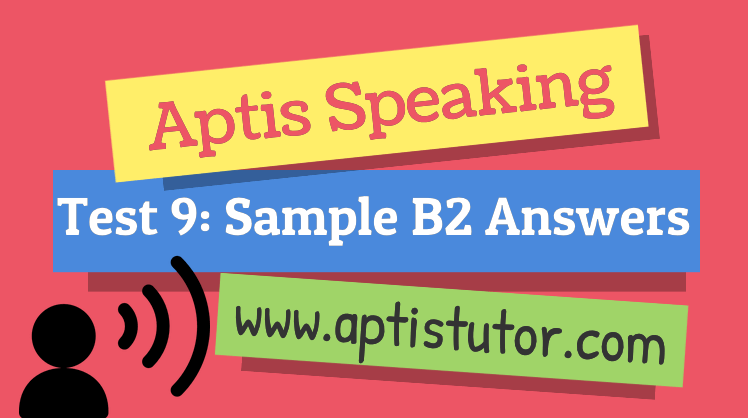 In this test with B2 answers we’ve highlighted a mixture of grammatical structures, phrasal verbs, useful vocabulary and expressions. It’s the supplementary version of Aptis Speaking Practice Test 9, and we recommend you to do the mock-exam practice before watching this video.

The reason for this is to give you time to think of your own answers first. Then you can try to improve those responses with the help of our sample answers. After you’ve watched this video, go back to the original version and try it again. Include some of the useful structures and expressions, but don’t try to copy our answers exactly, as they won’t sound natural.

In each video with sample answers we try to highlight different aspects of the answers. Remember you can always refer back to previous posts for more examples of language of speculation or ways to speak about the past, for example.

Again, it’s important to remember that these are prepared sample answers read out by native speakers. We’ve included as much as we can in order to give you lots of ideas. Keep in mind that your own responses in the test will nearly all be spontaneous, so you won’t be expected to give such full answers.  We say nearly all, because in Part Four you have one minute to plan what you’re going to say.

Here’s the video of the test with B2 answers, and you’ll find the full script below the video.

Please tell me about your house or flat.

It’s a small attic flat and we live on the third floor. There’s the main bedroom, a small second bedroom that we use as an office, an open-plan kitchen and lounge, a tiny bathroom and a terrace, where we usually have breakfast. The thing I like the most about it is that it’s very quiet and peaceful.

Please tell me about your daily routine.

On weekdays I get up around 7, have a shower, get dressed and grab a quick coffee. Then I cycle to work, which only takes me about ten minutes. I work from 8 to 1, when I have lunch in the canteen. My working day finishes at 4 … then I cycle home, go to the gym, watch a bit of telly and go to bed at about 11pm.

Try to use relative pronouns to join your sentences, as in the highlighted examples in the texts:

a bedroom that we use as an office

a terrace, where we usually have breakfast

I cycle to work, which only takes me about ten minutes

What are you planning to do after this test?

I’m not quite sure … I don’t have any real plans. I might meet up with my classmates and go for a quick drink to celebrate the end of the course. Or perhaps I’ll go straight to the shops … I’ve got to pop into the supermarket to buy some essentials, as my sister’s coming round for dinner and I haven’t got much food in.

Demonstrate what you know by using phrasal verbs when possible:

I might meet up with my classmates – go and meet, get together

my sister’s coming round – visiting me

There are four people sitting around a table, playing Monopoly. The two men are wearing bright white uniforms … I think they must be sailors. The other players are girls who look about 9 or 10 … they could be the sailors’ daughters. They’re dressed in summer clothes and both have shoulder-length brown hair in pony-tails. They all look as if they’re enjoying themselves … perhaps the sailors are on leave and having some family time. It looks like some type of games-room, because there’s a pile of board games in the corner.

perhaps the sailors are on leave – holiday from work

What type of family activities do people generally do in your country?

Hmm … that’s a bit hard to say, as every family’s different. In general, family life is important and most of us are pretty close. Probably the most important family activity is having meals together, especially dinner. It gives us the chance to catch up with each other, talk about what we’ve been doing and share any news. Some families play card and board games, especially if they have young kids. And another popular family activity is going for days out to the seaside or to the countryside, usually at weekends.

In general / probably – useful ways to generalise about a topic

How has family life changed in the last fifty years?

Well, I’d say family life has really changed a lot. 50 years ago, it was very male-dominated. Fathers went to work and made all the ‘important’ decisions, while women would stay at home, do all the housework and be responsible for looking after the kids. There’s more sharing of roles nowadays, which is a big change. Another thing is that most children used to live with their parents until they got married, whereas today many young people prefer to be independent and get their own place – if they can afford it.

if they can afford it – if they have enough money

Both pictures show young people looking happy, but in very different situations. The first shows two young women who look as though they’ve just finished their university degrees, as they’re wearing graduation gowns and hats and carrying certificates. They’re probably around 22 or 23 years old. In the second photo there are three people of a similar age, but they’re working in a fast-food restaurant. They’re standing behind a counter, making sandwiches, and you can see a selection of cut-up vegetables in front of them. It could be their first day at work.

Remember to use language of speculation:

It could be their first day at work – modal verbs (could be, might be, may be)

Why do some young people look for a job instead of continuing to study?

Well, I think there are many reasons, including your economic situation and your peer group. If you want to go to university and can’t get a grant, you have to rely on financial help from your family or a student loan from a bank. That can be very hard, especially if your friends are already working and you’re the only one not earning money. What’s more, graduates often find it hard to get a job in their chosen field when they finish their studies. So many young people prefer to start work as soon as they leave school.

get a grant – money to pay for studies, usually from the government

a student loan – money lent to you by someone, usually the bank

their chosen field ­– area of study or work

What would you advise a friend to do – study or work? Why?

Well, that’s a difficult question to answer, and it would really depend on the friend. Unless she or he already had a special skill and a business plan – for example, setting up a tech company – I’d probably try to convince my friend to go to college or university. These days the job market is so competitive that you really need a higher education qualification if you want to stand out. Another good option would be to do an apprenticeship – that way you start earning and learn a skill at the same time.

a special skill – knowledge or ability

the job market – jobs that are available

do an apprenticeship – work for someone who has a skill you want to learn, usually for little money

Tell me about a time when you decided to get fit.

Do you think people today get enough exercise?

Unlike some of the other questions, this is quite an easy one to answer. I clearly remember deciding that I had to get fit as soon as the first lockdown finished. I felt as if I’d spent three months doing nothing but sitting in front of the computer and eating!

I joined a gym, and at first I found it really hard. Doing even the smallest amount of exercise – five or ten minutes running – left me breathless! I felt really unfit and unhealthy. The best decision I made was to start going to the classes organised by the gym. The instructors make sure that you’re doing the exercises correctly and they also motivate you to try harder.

On the whole, I don’t think that people do enough exercise. People rely on cars too much and use them for the shortest of journeys. Children often spend hours playing computer games, when in the past they would run around and be more active. These days it’s really rare to see children playing in the street. This lack of exercise will lead to all sorts of problems in later life, such as obesity and heart disease. In my opinion we should all pay more attention to keeping fit.

I felt really unfit – physically out of condition

people do enough exercise – we do exercise (not make ­– see  Vocabulary: Make or Do?)

This lack of exercise – not enough of, or absence of something necessary

Check out all our Speaking Practice Tests – the complete list is in our Guide, together with all the other free exam material.

Make sure you’ve subscribed to our YouTube channel. Remember to click on the bell for notifications too, so you don’t miss any new videos. Speaking Practice Test 10 is coming soon!

Have a look at the vocabulary areas you need to focus on in Aptis Vocabulary and Topics, and think about How to Learn New Vocabulary.

2 thoughts on “Aptis Speaking Test 9 with B2 Answers”