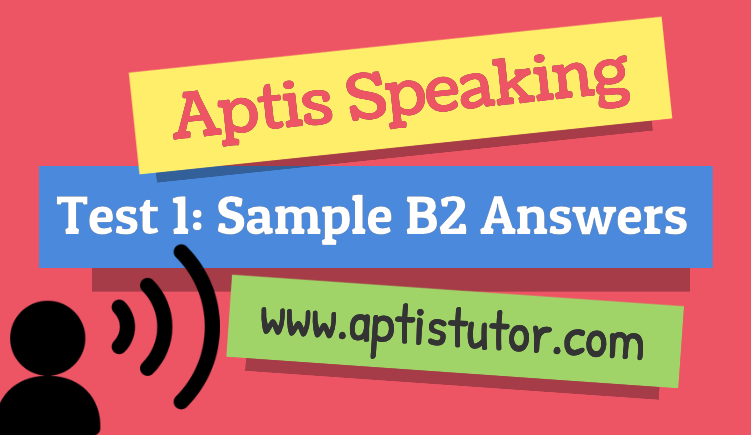 In this version of the original Speaking Practice 1 we give you sample B2 answers read by a native speaker.  The answers include B2-level grammar, functions and vocabulary.

You can compare it to the  Aptis Speaking Practice Test 1: Sample B1 Answers.  This will give you more of an idea of the difference in levels and what the examiner will expect at B2.

Remember to try on your own first with the mock-exam video Speaking Practice Test 1.  Then watch this video with sample B2 answers to give you some more ideas.  The script is also included below.

Now try the mock-exam video again, and we’re sure you’ll see the difference.  Remember that you need to practise, practise, practise to do well in the test.  Watching this series of videos will help you get used to speaking within the time-limits.

Don’t try to learn the entire script, just use it to help you to include common expressions and language appropriate to sample B2 answers.

We’ve underlined the most useful B2 grammar structures, lexis and expressions.

Remember you can find out more about B2 language here: Use of Language.

Well, I go to the gym and play tennis – I belong to a club, and I’ve won several tournaments – I’m playing in one this weekend. I’ve just taken up a new hobby – life drawing. I used to love drawing when I was a child, so I decided to try it again – I’ve started going to evening classes. Apart from that, I love reading when I get the chance ­– I wish I had more time for hobbies!

Last summer I went to a place I’d never been before ­– Thailand! I had a fantastic time – the beaches were amazing and the water was crystal-clear. We went snorkelling and saw loads of tropical fish. Thai food’s really tasty, though it’s quite spicy too! The people were friendly and welcoming, even though they must deal with so many tourists … I’d love to go again!

Well, it’s hard to say, but if I had to choose just one, it would have to be Leonardo di Caprio. I think he’s a really versatile actor – he’s starred in comedies, action films, romantic films, even science-fiction … and always plays very different roles, unlike some actors, who just seem to play themselves! I’m not sure if he’s ever won an Oscar, but I bet he will, sooner or later!

This photo shows a brightly-coloured classroom, probably in an infant or primary school, as the children look about four or five years old and the room is full of toys and books and pictures. It’s quite a small group – I can only see ten kids. They’re all sitting on the floor and looking very interested in what the teacher’s telling them. They might be learning how to say the date in Spanish, as there’s a calendar on the board in English and Spanish … maybe they’re also learning how to tell the time, as there’s a giant clock on the carpet where they’re sitting. It looks like a friendly atmosphere, not formal at all.

Well, it depends on what age-group we’re talking about, but I’d say most students probably start at around 8.30 or 9am … although in some schools different year-groups start and finish at different times. Some schools, especially religious ones, start the day with everyone together for assembly. They do two or three classes, then there’s usually a break, when they can have a snack or a ‘second breakfast’ … Then it’s back to the classroom till around 2.30 or 3 o’clock, when many students go home, though some stay on for after-school activities like sports or dance, especially if their parents work full-time …

In lots of ways … I think teachers were much stricter when I was at school – it seems to me that children have more freedom in class these days. They often call the teacher by their first name – we weren’t allowed to do that! We never used to sit on the floor … we would always sit at desks and it was more like a formal classroom. I think we got more homework than nowadays. And school subjects have changed too ­– now kids are taught all about technology and even get their own laptops or tablets – I’d have loved that! There were hardly any computers at my school … well, not in the classrooms anyway, only in the computer lab.

The first photo shows a street market selling fresh produce such as fruit and vegetables, and lots of other things too –there are stalls selling clothes, shoes, hats, and there’s something that looks like a tourist stall in the background … it might be selling arts and crafts souvenirs … it must be somewhere in Europe, because the price sign is in Euros … whereas in the second photo there’s a large modern shopping mall on at least two floors, with clothes shops on both floors, and people going up and down the escalators … the shop signs are all in English, but it could be anywhere as malls all look the same these days …

There are several possible reasons – for food shopping, markets are often cheaper, and the fruit and vegetables are usually fresher. On the other hand, in supermarkets you can choose your own produce, which many people prefer to do. For clothes shopping, I think most people choose malls because there’s so much variety and the clothes are better quality, though some people might choose to shop in street markets because the clothes are more original. And it also depends on the weather – malls are more comfortable, especially when it’s raining, or in summer when it’s so hot outside.

Well, it depends … if I have enough time, I prefer to shop in markets, because it’s more fun and you can sometimes find unusual things to buy … and it’s more personal too. When I’m on holiday I always go to street markets, as I think they give you a feeling of the country, and you can find more original souvenirs, whereas in shopping centres everything’s the same everywhere. On the other hand, in my daily life I usually prefer to shop in malls, because it’s easy to park there – parking’s a real problem in the city centre – and I can get everything I need in the same place, so it’s much quicker too.

I was once a bridesmaid at a friend’s wedding, and I had to wear a long green dress made of very stiff shiny material. It was a beautiful colour, but it was very uncomfortable!   I didn’t feel like me, because I hardly ever dress up in formal clothes – I usually wear T-shirts, jeans and trainers! The worst part was having to wear high-heeled shoes – I’m not used to wearing heels, and I found it hard to walk without falling over! There were two other bridesmaids and we all had to dress the same, which also felt very strange – as if we were wearing a uniform! I’m not a fashion addict, but I like to be original, so I didn’t like that!

Personally, fashion doesn’t have much importance in my life – being comfortable is much more important. In my opinion, fashion should be fun, and people should be able to wear what they like. In general, I think that people – especially young people – give far too much importance to fashion. They all want to follow the same styles as the stars, and wear designer labels, even though most of those clothes are far too expensive for many people … and that can cause problems with their parents. Fashion is big business these days … if you ask me, there’s too much pressure on people to spend loads of money on looking cool and having the latest clothes and accessories. What’s more, people sometimes judge you for not being in fashion, which can make you feel bad. To my mind, that’s wrong.

And test your grammar too.

And you can find all our practice tests and exercises in our Guide to the Posts.

2 thoughts on “Aptis Speaking Test 1 with Sample B2 Answers”

This website uses cookies to improve your experience while you navigate through the website. Out of these, the cookies that are categorized as necessary are stored on your browser as they are essential for the working of basic functionalities of the website. We also use third-party cookies that help us analyze and understand how you use this website. These cookies will be stored in your browser only with your consent. You also have the option to opt-out of these cookies. But opting out of some of these cookies may affect your browsing experience.
Necessary Always Enabled
Necessary cookies are absolutely essential for the website to function properly. These cookies ensure basic functionalities and security features of the website, anonymously.
Functional
Functional cookies help to perform certain functionalities like sharing the content of the website on social media platforms, collect feedbacks, and other third-party features.
Performance
Performance cookies are used to understand and analyze the key performance indexes of the website which helps in delivering a better user experience for the visitors.
Analytics
Analytical cookies are used to understand how visitors interact with the website. These cookies help provide information on metrics the number of visitors, bounce rate, traffic source, etc.
Advertisement
Advertisement cookies are used to provide visitors with relevant ads and marketing campaigns. These cookies track visitors across websites and collect information to provide customized ads.
Others
Other uncategorized cookies are those that are being analyzed and have not been classified into a category as yet.
SAVE & ACCEPT
Go to mobile version